From Apertium
< User:Pankajksharma
Jump to navigation Jump to search

Interest in MT and Apertium[edit]

Why is it you are interested in machine translation?

I am interested in Machine Translation (MT) because of two reasons. The first one is little Philosophical one, i.e., the ideology of making all the digital information present, openly available to everyone regardless of the language in which it's written or the language used by it's recipients. Also advancement in MT would cause in reducing the language barrier in the exchange process of ideas.

Second, I did my minor in Text Classification and since then become interested in Machine Learning and took me closer to NLP (a part of MT), this made me interested in MT. To be honest and I had only used MT only as an end-user until recently when I became aware of Apertium.

Why is it that they are interested in the Apertium project?

For a given sentence S in a source language and it's translation T in another language, the idea is to find the translation (T') of another sentence S'. The condition that S and S' must hold is that S and S' must have high Fuzzy-match score (or Low Edit Distance) between them. Depending upon what changes from S to S', we employ a set of repair operations (t, t') on T to get our T'. Here T' is a possible translation of S' and the pairs (t, t') (also, called repair operations here) holds the condition that t is a sub-segment of T and t' is the possible change which leads us to T'.

This idea was originally given by User:mlforcada.

These details are developed after discussions with User:mlforcada and other community members and may have slight variations during the implementation phase.

We will use following example throughout this section:

The project has been further divided into following phases (sub-tasks):

To find how much the given input source sentences (S and S') are similar to each other, we'd use the fuzzy match score of S and S'.

We would use the following method for finding the the fuzzy match score (FMS) between S and S':

Since the fms is large enough we'll proceed further.

Please check the coding challenge, to check in detail, how ED is calculated.

Finding what changed from S to S'[edit]

To find out the changes between S and S', we would employ the phrase-extraction algorithm with slight modification to obtain pairs (s, s') where s and s' are sub-segments of S and S' respectively and there is some non-alignment them. We'd call the covering set as set A.

The modification would be made only to consider those pairs which have one or more mis-match (or non-alignment) and satisfy following condition:

i.e., their longest common sequence will contain words present at index i of S and index j of S' for each pair (i,j).

Though the default phrase-extraction algorithm [implemented in the coding challenge] will give more pairs, we'll only consider those pairs which satisfy the conditions given above.

("his address recently", "his number recently"),

Translating what changed from S to S'[edit]

To translate the changes from source to target language, we'd be using the clippings that we created in above section, as in (s, s') pairs.

To consider the context of translation, we'd be using double validation, i.e., would be considering those pairs (s, t) which have following properties: s is a sub-segment of S, s contains some mismatch in S and S', t is a sub-segment of T and s translates to t. We'd call covering set as set B.

In addition to the pair (s,t), we'd also have to store the location to which t belong, because t may have multiple appearances in T, which could be problematic in upcoming sections. 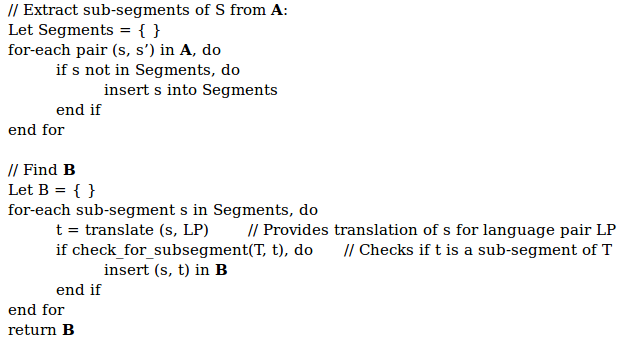 The set B would be:

The 3rd indices mark the positions of t in T.

We would have an "-r" option [see coding challenge for details] that could be used to find more pairs. This would be done by extracting sub-segments (t) from T and finding their translations (s), they would be added to above pairs, as (s, t) if the translation (s) will be a sub-segment in S as well.

We'd use Apertium python API (developed in the Coding challenge) to obtain pairs (s', t'). These pairs would have following properties: s' is a sub-segment of S', s' carries some variation (between S and S') and s' translates t'. We'd call the covering set as set C.

A better option of doing this could be processing of Translation memory for given language pair, which we'd employ in the second phase of this project. Please see preprocessing for detail.

The set C would be:

As stated above we can use "-r" option to increase chances to getting more pairs.

To find the covering sets all such pairs, we'd use following Algorithm:

The set D would be:

Please note that above algorithm is very naive, we'll improve this by using HashMap data-structures and other improvements.

As the number of of such pairs could be large so we'd employ some post processing technique to decrease their numbers (like removing subsets, removing single words, etc.). These pairs would be our repair operations, using which we'd try to obtain T'.

Instead of finding B, C, D independently, we can combine these algorithms to obtain our repair repairs. This method is likely to be more efficient than calculating those sets independently.

As the number of of such pairs would be very large (much more than those obtained in above section), so we'd employ post processing techniques to remove the unwanted pairs.

For this we could employ a number of techniques like removing subsets, removing single words, etc.

Please Note: The independent algorithms given in above sections are mostly for explanation purposes and most probably we'd use a more robust version of this algorithm during implementation.

After we have obtained our set D, we can use the repair operations (t, t') on T (or path T) to obtain possible T'.

Now the point worth noting is that even after the post processing D may still have multiple repair pair. By choosing or leaving any such pair, we could have 2^n ways to patch for "n" candidate repair operators. Our aim is cover all mismatches, and cover them in the best way possible (or abort if there isn't any).

To cover this, we'd employ a strategy, outlined as follow:

(A) Keep track of where the path is to inserted and which parts would it cover.

(B) Apply 2 or more patches on same T if the values of ts in them either have no overlap or a permissible overlap.

After applying these patches, we'll receive a set of candidate T's.

Luckily, in this example we only received a single translation after applying all the repair operations. Though, this will not be the case in most of the other examples.

Out of all the values of T*, we must choose the value of T'.

To generalize this, we'd have to develop a repair policy, which based on parameters like context coverage, repair lengths, and other parameters could provide us the best translation value T'. We could do this by making use of machine learning by learning from an example set (in which we'd have T' given) by calculating values of FMS(T, T'), where T is an element of T* and chose best repair pairs and then to generalize the same for other unknown sentences S'.

After the basic framework is being prepared, we could preprocess an existing translation memory (i.e., large set of (S, T)) using coding challenge work to get and index a large set of (s,t) pairs that are "doubly validated": on the one hand, t is the MT of s (or s is the MT of t), but on the other hand, they'd have been observed in your translation memory. In the future, they could be used as "higher quality" (s',t') pairs used to build "better" patches for new sentences.

As suggested by User:mlforcada, I did my coding challenge work and it was really helpful in my understanding of Apertium and also in understanding this whole project. You can find the code at https://github.com/pankajksharma/py-apertium

Currently it has following main programs:

This was the objective of the challenge and it takes source sentence S, target sentence T, language pair LP and provides set of pairs (s,t) such that s is a sub-segment of S, t is sub-segment of T and s translates to t.

For more about options and other parameters, please check above github link.

As the project allows you to use any scripting language I'll be using Python.

The main program would have nearly following API (might change slightly during implementation):

--allow-plugs Allows user to patch the sentence without context as well.

--safe-patches Safe patches only (having context on both sides).

Time line of the Project[edit]

We'd use following schedule for executing this process:

Community Interaction Period: I would employ this interval for interacting with Apertium community and project mentors. Apart from this I'd be reading all the existing work that has been done and required algorithms.

What's been done til now ?

Currently the approach uses a series of loops to find relevant string pairs, but I think they could be interleaved as in the algorithm I sent. This could be a nice subject for discussion before week 1 --Mlforcada (talk) 19:09, 27 April 2014 (CEST)

I did my Minor project (of 14 credits in our course work)under the supervision of Prof. M M S Beg on the topic of Text Mining. Code for the same could be found here.

I co-authored a paper titled "Frequent Sequential Patterns based Probabilistic Model for Effective Classification of Web Documents" (currently under review) on the same project.

I'm quite proficient in Python and have done several projects in it. A list of projects and scripts have I've written in Python could be found here.

I've limited experience of programming with open source communities. Some of that are:

I've submitted some patches for PTS project of Debain (for example this).

I've also written some plugins for wordpress (could be found here).

Apart from this, I'm a core member of our college's Linux User Group and we promote Linux and open source software via various meetups held time-to-time.

No, I don't have any other engagement for the Summer and would be more than happy to devote 30+ hours every week for this project.