Apertium offers the ideal opportunity for me to contribute something meaningful to my Mongolian heritage. Founded on the principles of preserving culture and heritage through language, Apertium connects the realms of the ancient and modern through advances in machine translation platforms.

I am currently double majoring in computer science and cognitive science as this is the perfect combination of my love of computer intelligence and my fascination with the human mind. I like to imagine every individual as a different galaxy with their own stars, planets and weird things. And I have always been curious about studying new languages and their structures because, to me, it always seems that the secret “bridge” spanning human intelligence lies there. By working with the Apertium’s machine translation platform, not only will I explore this passion of mine, but I will pursue my life purpose “to create and contribute something totally unique to this world”.

I am interested in Apertium because I believe that preserving dying languages could potentially help us understand how the human brain categorizes objects (ways of viewing) and how the human mind takes and stores information. Through the study of the world's languages, we can potentially discover what is and isn't possible in a human language. This, in turn, tells us important things about the human mind. The fewer languages there are to study, the less we will be able to learn about the human mind and the full range of complexity and structures it can produce.

One is Mongolian Cyrillic (khk), written horizontally like this:

The other one is the traditional Mongolian script (“Mongol bichig”, mvf) written vertically down the page like this: 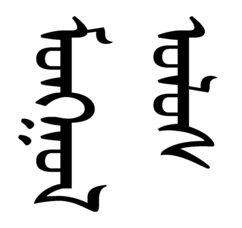 The script has stood the test of time henceforth and has served as a unifying factor for various Mongol speaking ethnic groups. A hallmark of Mongolian script is being the only vertical script in human history that is written from left to right. All other vertical writing systems are written right to left (Wikipedia). It is an easy and speedy way of documenting what is spoken orally and has, over centuries, produced a great number of variations to be used for different purposes.

Mongolian Cyrillic and Mongolian Script both have the same syntactic structure, so they have the exact structure in terms of sentence level and only vary within a word level.

There is a huge amount of parallel translated (mvf-khk) text with ready a vocabulary and rules (for example [1]). 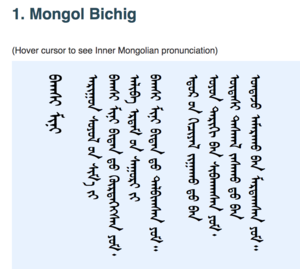 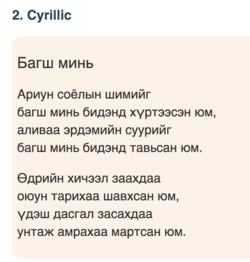 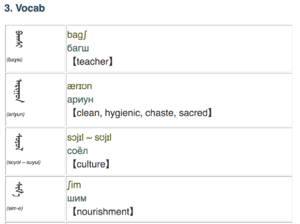 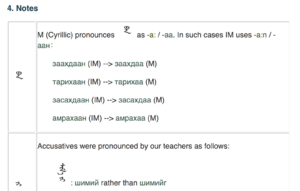 How and who will benefit in society? Why should Google and Apertium sponsor it?[edit]

The study of languages and literature, including one’s mother tongue, are part and parcel of what we mean by the full development of the human personality. Developing expertise in one’s mother tongue serves as “the passport to life” in the community in which one was born.

The traditional Mongolian script, originating in the early 13th century by the order of Chinggis Khan, is one of the most meaningful intellectual and cultural heritages of the Mongolian people. Most handwritten and printed books, administrative papers, family tree records, fairy tales, legends and Buddhist manuscripts were produced in the traditional Mongolian script until 1945 when Mongolia painfully and forcefully shifted to Russian Cyrillic alphabet under the Kremlin’s order. When in 1990, the democratic peaceful revolution overthrew socialist system, Mongolia eventually moved towards democratic present-day Mongolia and the writing of the new constitution. In September 1992, education in the Mongolian script began from the first year of primary school but unfortunately, most people felt it was too difficult to learn and hence not worthwhile after all.

Today, although the Cyrillic script is used nationwide, all the government seals starting with the Head of State, the Prime Minister and Cabinet ministers are all in the Mongolian script, which is a matter of pride. While visiting the Government Palace, I met with the Minister of Education and Science who informed us that a law on Mongolian script was passed in February 2015, under which the traditional Mongolian script would become the national script in 2025. News of this future law made the whole nation rejoice and has been met by the public with tremendous enthusiasm to learn and master the national script banned and purged since 1945.

There are over 50,000 registered manuscripts and historical records written in traditional Mongolian script stored in the National Library of Mongolia. There are many more manuscripts and books in traditional Mongolian script stored in libraries of other countries such as China, Russia, and Germany. Despite the importance of keeping millennium old historical materials in good conditions, the Mongolian environments for material storage are not satisfactory to keep historical records for a long period of time. I believe that the most efficient and effective way to keep and protect these invaluable historical materials while digitizing and creating a digital library is to make them publicly available and help the younger community to actively engage with them.

Development of this language pair will tremendously contribute to the development, print, and distribution of new textbooks and educational documents. As the target materials have long been inaccessible to many and neglected under the communist rule, it is of great interest and importance lately to scholars, historians, researchers, students, and to general public for unveiling the true history of the nation not only when it was a unitary sovereign socialist state, but the history from the early 13th century until today.

A complete machine translation platform for this pair will be “the passport to” Mongolia’s intellectual and cultural heritages not only for the younger generation but also for the whole Mongolian and International communities. Millions of invaluable historical documents that exist solely in Mongolian Script will become readily available to a worldwide audience.

During the post-application period, the following plan will become more detailed, as I work closer to the task:

The current field of study/major: I am currently double majoring in Computer Science and Cognitive Science at Swarthmore College (Pennsylvania, USA).

Relevant work experience: I have worked at “Gazar Ord” LLC (Ulaanbaatar, Mongolia) for 46 months as an assistant data analyst and a Russian language translator.

My last finals exam is on 15th of May so after May 15 I will spend ~45 hours per week on this project.