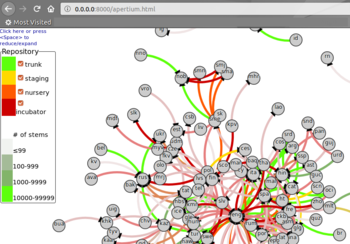 The Apertium Pairviewer is a HTML5/D3.js tool that depicts all Apertium language pairs in an interactive graph initially developed sometime before the Google Code-In 2013. Its source code can be found on GitHub and an online demonstration is available here.

The Global-Pairviewer is an implementation of Pairviewer with a three-dimensional globe. See this.

Set up a localhost with Python[edit]

You need to set up a localhost server before you can locally run Pairviewer.

First, check whether you have Python installed on your system and if so, what version(s) it is. Install preferably the latest one (Python 3) if it had not been done already.

Then make sure to enter the folder of the git repository you have cloned.

Otherwise, if you do have Python 2, run:

You should see something like this on your terminal window.

Type localhost:80000/apertium.html into your browser's address bar and go.

This should successfully launch the Pairviewer. This step requires downloading some D3.js resources, so if your internet connection is slow, this might take a while.

Apertium language data are being continuously developed, so it is highly possible that the language data that your Pairviewer were shipped with isn't up to date. 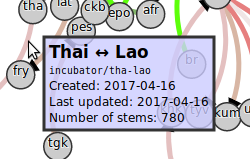 Hovering over the language pair line between tha and lao.

The nodes (circles representing the languages) can be dragged around to rotate or move the entire graph.

Stats for the number of languages and language pairs represented in the graph can be found in the bottom-left corner.

Typing anything will produce a search box in the bottom right. Ctrl+F (find in page) can also be used for search.

The collapsible menu on the top left lets you filter languages according to its:

The Pairviewer is made of nine components:

There are a few apparent bugs that should be fixed before the pair viewer goes public.