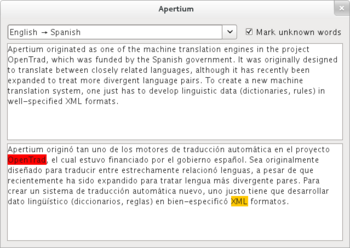 The English ⇆ Spanish package running as a standalone Java application. The same file could be used from other client applications like Apertium-Caffeine or Apertium-OmegaT.

Language pair packages are standalone JARs that can be run independently as well as used from other client applications like Apertium-Caffeine or Apertium-OmegaT. The only prerequisite to use them is Java 6 or better (apertium, lttoolbox or lttoolbox-java are NOT required), and they can work on practically any platform (Linux, OS X, Windows and even Android!).

Since JAR files are nothing but renamed ZIP files, you can easily edit language pair packages to fit your needs. Note that the packages are ready to be used without any modification, so the vast majority of users will not get any notable advantage from doing it. In any case, editing packages could happen to be useful, for instance, in order to reduce their file size by removing unnecessary content.

The typical structure of a language pair package would be the following one:

In order to create language pair packages, a working installation of the last version of lttoolbox-java at SVN is required. Provided that you meet this requirement, you simply need to run apertium-pack-j passing the mode files for which you want to generate the package as argument. For instance, the following command would create a ready-to-use package for the Esperanto ⇆ English language pair named apertium-eo-en.jar (the first argument determines the name of the output file):

In order to create Android compatible packages, you need a working installation of the Android SDK. Once you have it, you need to specify its location by setting the ANDROID_SDK_PATH environment variable as follows:

You will need to replace /home/mikel/developer/android-sdk-linux with the right path of your Android SDK installation.

Once you have done it, simply run apertium-pack-j as explained above, and the generated package will be compatible with Android devices.

Out of the 31 released pairs, the following 25 have fully working and ready-to-use packages that are maintained under the builds/ directory at SVN. You can directly launch them in a Java enabled browser by clicking in the JWS links. You can also download the JARs and run them as standard Java applications or use them from a client application by clicking in the JAR links.

The list below is outdated. In 2020 the pairs can be found here: https://svn.code.sf.net/p/apertium/svn/builds/language-pairs

The following 7 released pairs depend on CG:

Invoking external programs is supported by language pair packages, so it is still possible to create packages for these pairs. However, you will need to install CG in your machine for them to work. Due to this limitation, precompiled binaries are not offered for these pairs, but you can still create them by following the instructions in the previous section.