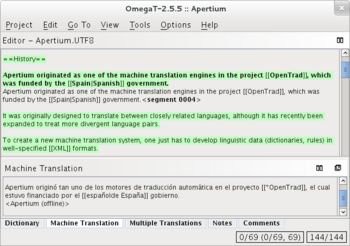 Download apertium-omegat.jar from [1] and copy it to the plugins/ directory of your OmegaT installation. The folder in question is the folder that contains the OmegaT.jar file, for the Mac version this is e.g. the /Applications/OmegaT_3/OmegaT.app/Contents/MacOS/Java/ directory.