From Apertium
< User:Mary.szmary
Jump to navigation Jump to search

Why is it that you are interested in the Apertium project?

I have participated in GSoC 2016 with Apertium, which made me involved in this project, this is one of the main reasons why I am interested in contributing to Apertium. Another reason is that, being a linguist, I find it beneficial to develop linguistic tools, and Apertium gives me a good opportunity to do so.

I am planning to work on UD-annotatrix. This will include making a user-friendly interface, which would enable linguists to make syntactic annotation quickly and easily.

Reasons why Google and Apertium should sponsor it

Dependency treebank is a corpus of sentences with annotated dependency structure. It can be used both for the purposes of linguistic research and for training statistical parser, which in turn can serve different purposes of natural language processing. For creating a good treebank, manual annotation and/or disambiguation is required. Currently there is an interface for doing syntactic annotation called brat. However, the interface has a number of issues. Firstly, it does not allow a user to edit the source. Secondly, it does not allow to edit tokenisation. Basically, this interface lacks a lot of features that could be very useful for annotation. Finally, it requires a web-server in order to be used by a team of annotators.

There is also a project aimed to make a toolkit for working with dependency trees in Apertium. At the moment, it allows to visualize the trees. The aim of my project is to create an easy-to-use, quick and interactive interface tool for UD annotation based on the existing Apertium project. The tool should work both online and offline and allow a user to edit the annotation in both graphical and text modes.

Apart from serving the wide interests of the linguistic community, the treebanks created with the help of this tool can be used for the purposes of the Apertium machine translation platform itself. E.g., the standardised annotated corpora available through the Universal Dependencies project could be immensely useful to training the Apertium's PoS taggers. Although the taggers do not need the full tree structure, treebanks is the richest source of standardised annotation, which Apertium is able to make use of. Moreover, as dependency annotation is more general purpose activity, there would be much more people willing to be involved in it. So, Apertium will be more likely to receive the data for its needs as a side product than by trying to get people to doing Apertium-specific annotation. Another possible application is to extract CG rules from dependency annotation. There is no existing tool for doing so yet, but there is also a project aiming to create such a tool. Finally, making such a functional and easy-to-use tool for dependency annotation could be beneficial for Apertium in that it will attract wider attention of another linguistic community, also concerned about minority languages problems and creating free/open-source linguistic resources.

A description of how and who it will benefit in society

The result of this work is going to be useful for linguists who deal with dependency annotation.

Apertium has a web-interface for visualising syntactic trees written in Java-Script and HTML. The interface works with three annotation formats, namely CoNLL-U, CG-3 and SD. The current system allows a user to either enter their trees in the text area or upload a treebank from a file and switch between sentences. 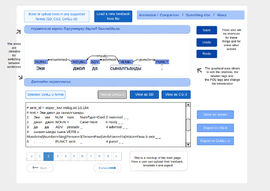 The main idea of this project is to create a graphical interface for UD annotation based on the existing project. (However, in case, it turns out that it is hard to implement an interface with this functionality based on what there already is, it is possible to write it from scratch, using some appropriate framework. Here is a mockup of the interface.

It should be able to perform the following actions:

The main page consists of the following components:

If there are too many functions, some buttons will be replaced with a toolbar.

week 1: coding the skeleton of the project
weeks 2-3: working on the graphical editor area
week 4: finishing the basic interface
Deliverable #1: there is an interface which allows to edit trees an save changes
week 5: working on keyboard shortcuts, optimising and increasing usability of the toolbar
week 6: developing the interface for tree comparison and disambiguation
week 7-8: working on the saving and sharing part of service
27 June: midterm evaluations deadline
Deliverable #2
week 9-10: increasing the functionality
week 11: testing, fixing bugs
week 12: cleaning up the code, last fixes, writing documentation
Project completed: a user-friendly interactive annotation interface is ready to use

List your skills and give evidence of your qualifications

I'm a 4th year bachelor student of Linguistic Faculty in NRU HSE (Russia).
Programming skills: Python (including Flask, Django, SQLite, Elasticsearch, nltk), Bash, R, Java-Script (not very experienced, but ready to quickly learn).
Other computer skills: HTML, XML, CSS, JSON, deploying python projects on a Ubuntu server
Experience: I already worked on a couple of projects which included making a web-interface. For example, a have written a web-interface for a unified online dictionary of antonyms. The project is written in Flask (Python), HTML and CSS and uses SQLite database. I also have another Flask project, which consists in making online linguistic exercises and also uses SQLite. Apart from these projects, I am currently working on a larger team project, which is to make a universal linguistic corpus platform. The frameworks used in this project include Elasticsearch (NoSQL db) and Django. We are also going to use JavaScript in it, so, by the end of spring I will be much more experienced with the language.
Natural languages: Russian (native), Polish, English, German, basic knowledge of Indonesian.


Coding challenge: I’ve fixed the #18 issue on the project's github.

At the beginning of June I will be finishing a project aimed to make a universal corpus platform, but, as the work on that project is mostly going to be done earlier, I do not think, that it will significantly affect my ability to work on the GSoC project. After that, I have no other no-GSoC plans.