Difference between revisions of "Tinylex on a Palm"

Mobile dictionaries for Palm can be generated using the dix2tiny task in apertium-dixtools package. 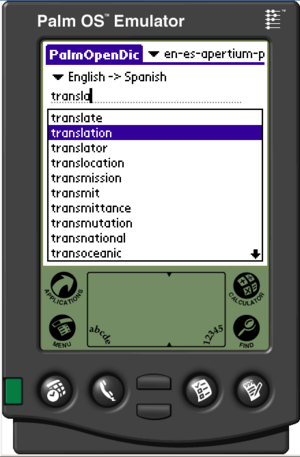 There is a lot of people out there who use Palm handhelds and could benefit from Apertium bilingual dictionaries.

There is an opensource application for Palms called PalmOpenDic that can handle dictionaries.

Dictionaries in a rather easy text-like format such as the one used by dict.cc (see the file request page of dict.cc) can be converted with a Java application (for the desktop) inside PalmOpenDic into the Palm database format used by PalmOpenDic.

Apertium bilingual dictionaries could easily be converted, using ltexpand, into a dict.cc-like format and then distributed with PalmOpenDic.

Mikel has tried to install a the resulting, converted file into his Zire 22 Palm but got a message when using jpilot to install ("Instal·lació de DictCC.pdf ha fallat"). This was probably because the file was too large. After converting just a section, it worked nicely.