From Apertium
Revision as of 02:22, 10 March 2018 by Shardulc (talk | contribs) (GitHub migration)
(diff) ← Older revision | Latest revision (diff) | Newer revision → (diff)
Jump to navigation Jump to search
Note: After Apertium's migration to GitHub, this tool is read-only on the SourceForge repository and does not exist on GitHub. If you are interested in migrating this tool to GitHub, see Migrating tools to GitHub. 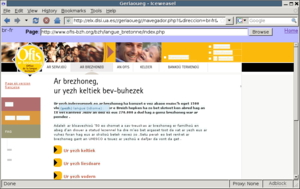 Geriaoueg is a set of scripts which use apertium morphological analysers (see list of dictionaries) and a bilingual wordlist to provide vocabulary help when browsing the web. It was inspired by the BBC's "Vocab" tool. The software can be found in apertium-tools/geriaoueg, currently it works with most web browsers with the exception of Internet Explorer.

In order to set up the software for a new pair of languages you will need a morphological analyser which outputs Apertium format analyses (e.g. with lttoolbox or HFST) and a bilingual tab-separated wordlist. It is hoped that this will make Apertium format resources more useful to more people, and be a step toward building a full machine translation system.