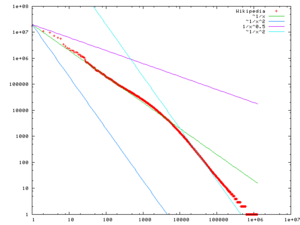 A plot of word frequency in Wikipedia. The plot is in log-log coordinates. x is rank of a word in the frequency table; y is the total number of the word’s occurences. Most popular words are “the”, “of” and “and”, as expected. Zipf's law corresponds to the upper linear portion of the curve, roughly following the green (1/x) line.